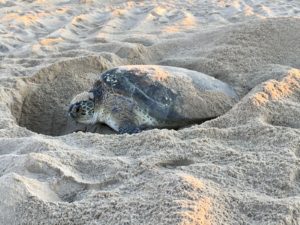 A close-up view of a green sea turtle digging her nest in the sand on the beach of Cape Hatteras National Seashore. Photo: NPS/Will Thompson

While their great size and hard shell provide tremendous defense against marine predators like tiger sharks, they do not protect green sea turtles from some of the greatest threats to their survival. As they travel between sea grass beds, they must avoid numerous man-made hazards. For instance, fishing gear like gillnets may entangle turtles, and discarded plastics can cause life-threatening damage to their digestive tracts if swallowed. Green sea turtles must survive these dangers for 20-30 years before they get the chance to breed, and coming onto shore to lay their eggs poses even more challenges. Much of the green sea turtle’s historical nesting habitat has been lost to coastal development, and human activity on undeveloped beaches may frighten nesting females, causing them retreat back to the ocean instead of laying their eggs. Hatchlings may also get misoriented and crawl towards the artificial light from cities and towns rather than the ocean, which makes it more likely they will be found by a predator. Only if a green sea turtle overcomes all of these obstacles can the next generation of sea turtles succeed. 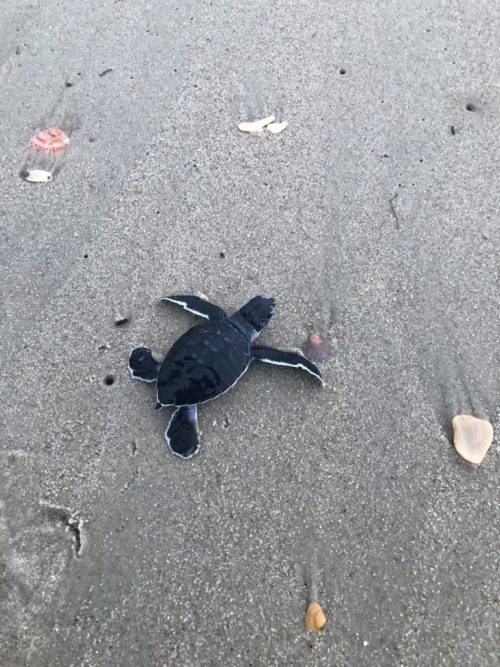 Because green sea turtles are found throughout the sea grass beds of the Atlantic, Pacific and Indian oceans, organizations around the world are dedicated to their survival, and Cape Hatteras National Seashore is a part of that legacy of conservation. But in order to protect green sea turtles, park staff must first locate their nests, and the unique biology of the green sea turtle makes finding them a unique challenge. When a sea turtle finds the spot on the beach where she wants to lay her eggs, she will use her weight and her flippers to dig a depression called a “body pit.” Then, using her rear flippers, she will dig even deeper to create a nest cavity where she finally lays her clutch of around 120 eggs. Because green sea turtles grow so large, their nest cavities are dug far deeper than other species. Loggerhead sea turtles, the most common sea turtle species nesting on Cape Hatteras, dig nests around ten inches from the surface of the sand on average. Green sea turtle nests, however, can nest three times as deep, beginning their nest cavity 30 inches from the surface. To complicate the search further, green sea turtles may dig several body pits as decoys to make it difficult for nest predators like raccoons, foxes and even coyotes to find their eggs. The same traits that make green sea turtles special also make them a special challenge to protect. 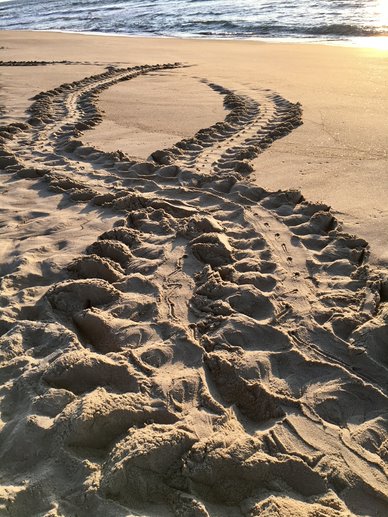 Ultimately, the National Park Service helps minimize the challenges sea turtles face when they arrive on shore to lay their eggs. Nighttime beach driving, for instance, is limited so sea turtles are not disturbed when laying their eggs, and symbolic fencing protects their nests to prevent accidental damage from vehicles, pets and pedestrians. Additionally, even the small amount of light from the villages on Cape Hatteras can misorient a sea turtle hatchling, so National Park Service staff constructs filter fencing around the nest; this black fabric not only blocks distracting light pollution, but helps guide the newly hatched turtles in the direction of the ocean. Together, these protections give the green sea turtle hatchlings from the six nests found on the Seashore this year the best possible chance to grow, graze in the sea grass meadows and return to the shores of Cape Hatteras to begin the cycle once more.

You can also symbolically adopt a sea turtle nest! Your donation will fund projects and programs that protect and enhance Cape Hatteras National Seashore today and for future generations.

Ben Ranelli is a biological technician working in the Ocracoke district of Cape Hatteras National Seashore. Originally from Connecticut, he began working for the National Park Service after previously conducting research at the University of Connecticut and the Smithsonian Conservation Biology Institute. Working with birds, mammals, and turtles across forests, mountains and seashores, he has dedicated his time to understanding and sharing the incredible diversity of wildlife in the eastern United States.