Rarest of the Rare: Conservation of the Kemp’s Ridley Sea Turtle

This month Ben Ranelli, Seasonal Resource Management Technician at Cape Hatteras National Seashore, tells us all about the Kemp’s ridley sea turtle, a rare visitor to the OBX!

Rarest of the Rare: Conservation of the Kemp’s Ridley Sea Turtle

Lifting her head above the waves, a sea turtle takes in a much-needed breath of air. For the first time in over ten years, she can see the North Carolina barrier island where she was hatched. Since then, she has spent her entire life in the shallow, coastal waters off of the United States hunting for crabs, fish, and mollusks on the sea floor. In all this time she has only grown to be two feet long, much smaller than many of the other turtles that swim in these waters, but she is a fully-grown adult. Forcing her way up through the wet sand using her muscular front flippers, she searches the beach for the place where she will lay her eggs and begin the next generation for her species. She is a Kemp’s ridley sea turtle, and she is the rarest sea turtle in the world. 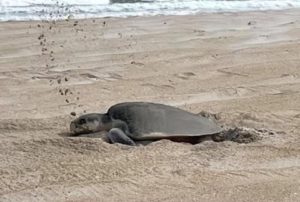 The Kemp’s ridley sea turtle stands out among sea turtles for their appearance, behavior, and even their unusual name. “Kemp” in its name honors Richard Moore Kemp, the Florida fisherman who first captured a specimen for study in 1906, but the origins of the “Ridley” piece of its name are unknown. The Kemp’s ridley sea turtle is also the smallest species of sea turtle; adults typically grow no longer than two feet and weigh around one hundred pounds. By contrast, green sea turtles, which also nest on Cape Hatteras, can grow over four feet long and weigh over 400 pounds.

Unlike most other sea turtle species, Kemp’s ridley turtles may also come ashore to nest during the day and sometimes in large groups. On some beaches in the Gulf of Mexico, they may gather by the thousand to lay their eggs on the same beach in an event known as the arribada (Spanish for “arrival”). Only the olive ridley sea turtle, a close relative of the Kemp’s ridley sea turtle, gathers in such numbers.

All sea turtle species face numerous challenges that threaten them with extinction. Sea turtles have lost much of the historic habitat they relied on to lay their eggs, and those who have found nesting sites might have their nests poached or accidentally destroyed. Even the turtles that successfully hatch face incredible risks, like being tangled in fishing nets or other ocean debris.

All six species of sea turtle that nest on the shores of the United States are listed under the U.S. Endangered Species Act, but the Kemp’s ridley sea turtle is the species most in danger of going extinct. Other endangered species of sea turtle, like the loggerhead and green turtles, can be found throughout the world’s oceans. Kemp’s ridley sea turtles, however, only live in the western Atlantic and the Gulf of Mexico and only nest on a few special beaches. Because they rely on only a few beaches to lay their eggs, how we treat their remaining nesting habitat is crucial if the species is to survive.

North Carolina lies near the northern tip of the Kemp’s ridley sea turtle’s breeding range, and only a few individuals travel this far north to breed. There has not been a recorded arribada, or mass nesting event, in North Carolina in modern history, but with population numbers so low, it is critical to provide each nest with the best chance of survival. 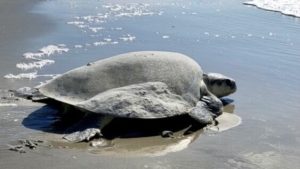 A Kemp’s ridley sea turtle crawls back to the ocean on Ocracoke Island.
Photograph Courtesy of NPS/Aaron Walker.

The National Park Service monitors the beaches of Cape Hatteras National Seashore for nesting turtle activity every morning during the sea turtle breeding season, typically from May 1st to September 15th. Because Kemp’s ridley sea turtles most often nest during the day, park staff can also take measurements of the turtle’s length and check for special tags that researchers use to track individuals. Once the turtle digs her nest in the sand using her back flippers and lays her eggs, signs are placed around the nest to make sure it is protected from accidentally being trampled or struck by a vehicle. Then, closer to hatching time, special fencing is added to filter out distracting light pollution and help guide the newly hatched turtles to the ocean.

You can also symbolically adopt a sea turtle nest! Your donation will fund projects and programs that protect and enhance Cape Hatteras National Seashore today, and for future generations.

Ben Ranelli is a biological technician working in the Ocracoke district of Cape Hatteras National Seashore. Originally from Connecticut, he began working for the National Park Service after previously conducting research at the University of Connecticut and the Smithsonian Conservation Biology Institute. Working with birds, mammals, and turtles across forests, mountains, and seashores, he has dedicated his time to understanding and sharing the incredible diversity of wildlife in the eastern United States.