It all started with a vacation.

In the late 1970s, Fred Hattman, an Air Force veteran from the Bronx, was living with his wife, Ronnie, and their three children in Connecticut, trying to find an unhurried place for a peaceful family trip. 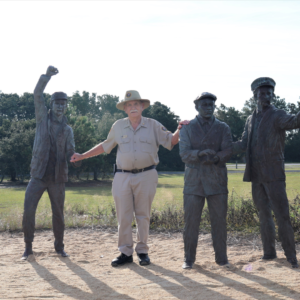 “We went to Disney World – that year it was really bad. We had lines you wouldn’t believe at Disney World,” Fred said. “We were looking for a place that was quiet. So, I went down the list. I looked at New Jersey; that was kind of expensive. Then I looked at the Outer Banks, and the prices seemed to be right. And at that time, I had three young kids. So, we decided to try coming down to the Outer Banks.

“We really loved it. It was quiet, not like it is now. Then we started coming down every year because we really liked it. The kids loved going to the pool and to the ocean; it really wasn’t stressful. We had a good time here.”

Fred and his family liked the Outer Banks so much, they decided to buy some land.

“I thought it was kind of crazy. I was afraid to tell my mother, my sister, that we bought a piece of sand property because there was really nothing here,” Fred said. “So, we just kind of held on to it.

“In 2001, I finally retired from the company I worked for. But previous to that, maybe like 10 years before, we decided maybe we ought to build something on the property. So, we did have them build a house for us. We rented it out for like 10 years, until 2001, when we finally came down here permanently.”

After settling into life in the Outer Banks, Fred decided he wanted to return to work. He took a job delivering newspapers for The Coastland Times — which he did for 14 years — to businesses and newspaper boxes from Oregon Inlet to the ferry dock in Hatteras. While he was delivering one day in 2006, he stopped at the post office and saw a flyer that caught his eye.

“I saw a little piece of paper that said they were looking for volunteers at the Wright Brothers [National Memorial]. So, I called the number and they signed me up. From 2006 to now, I’ve been here,” Fred said. “I enjoy it. People here are friendly; they’re nice. We’ve got seasonals [rangers]; they come and they go, but basically everybody works like a team.”

Fred credits Darrell Collins, an internationally renowned expert on the Wright brothers, author, former park ranger and Manteo resident, with his success as a volunteer.

“I worked with him a lot. Basically, everything I know, I learned from Darrell,” Fred said. “If you have anything you need to know about the Wright brothers, he’s the one.”

In his 15 years of volunteering at Wright Brothers National Memorial, Fred has become a man of many talents: he answers the phones, engages with visitors, operates the wing warping exhibit in the Visitor Center and is actively involved with the Junior Ranger program. Currently, Fred works at the park on Tuesdays, Wednesdays and Fridays from 9 a.m.-1 p.m.

“For four hours, I’m the face of the Visitor Center,” Fred said.

Having lived, worked and volunteered in the Outer Banks for so many years, Fred is passionate about sharing the Wright brothers’ story and legacy and encourages people to come visit the park.

“They should visit to learn the history of the United States. I mean, this is where aviation took off. This brought the whole world together,” Fred said. “This [aviation] is the most important invention of the world. This is it.”

When asked what advice he has for those who are considering volunteering in their OBX national parks, Fred’s message was enthusiastic: do it.

“I’d say it’s the greatest place you can be. It’s history,” Fred said. “It’s everything you want to know about. Everything is important here and also all the way down to Hatteras, different parts of the park.

“It’s really the greatest thing you could do. I’m at Wright Brothers and I look out there, where the rocks are, where they did the landings, and I can almost picture them running around, flying.”

“I love it — to meet different people, to answer questions. Most of the time I find out they don’t know much about the Wright brothers,” Fred said.

“I enjoy working with the people here. It’s a good crew; everybody has a good time. It’s fun. And I’m still going strong. I haven’t given up. Never give up.”

To learn more about volunteer opportunities at Wright Brothers National Memorial, you can visit: https://www.nps.gov/wrbr/getinvolved/volunteer.htm