Small But Mighty: The Banker Ponies of Ocracoke Island

If you’ve had the opportunity to travel to Ocracoke Island, then you may have stopped to visit some of the island’s most popular residents: the Banker Ponies that are protected and cared for by your OBX national park staff.

But how did these ponies come to be on the island?

According to Cape Hatteras National Seashore, it is likely that the ponies first came to the island in the 1500 or 1600s aboard the ships of European (Spanish or English) explorers. 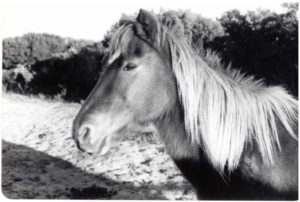 Numerous legends have arisen as to the ponies’ origins. A brochure from your parks’ Museum Resource Center archives lists several possibilities:

According the brochure’s author: “…careful study of the horses themselves and historical data lead strongly to the conclusion [that] they are the descendants of Spanish horses brought to the East Coast of the United States in the sixteenth century.”

Despite the ever-changing winds and waves of the Outer Banks, the Ocracoke ponies have established their home on our island for more than 400 years! Banker Pony herds also live along North Carolina’s Shackleford Banks, which make up part of Cape Lookout National Seashore. Several of your ponies Ocracoke Island herd are direct descendants of the Shackleford herd. 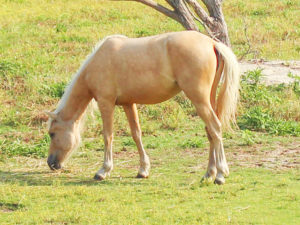 Ocracoke’s Coastal Guide estimates that Banker Ponies weigh anywhere from 800 to 1,000 pounds and are between four and five feet tall. Meg Puckett, the herd manager of the Corolla Wild Horse Fund, explained that Banker Ponies possess incredible endurance and stamina and are able to self-regulate. If they begin to tire out while walking, they will slow down until their heart rate drops and then speed up again. Banker Ponies are highly intelligent and very sturdy, capable of carrying heavy loads and full-sized people.

When people began to settle on Ocracoke in the 1700s, they began to domesticate some of the ponies.  Cape Hatteras National Seashore reports:

“When the early colonists settled Ocracoke, they used the ponies to help make life easier on the island by pulling carts to haul freight and fish. The U.S. Lifesaving Service used them for beach patrols and to haul equipment to shipwreck sites and the U.S. Coast Guard kept a small band of ponies to patrol the beaches in World War II.”

Up until World War II, the Banker Ponies were “penned” each summer on or around Jul. 4, when they were corralled into an enclosed area and branded and/or sold. After the war, the penning tradition resumed. 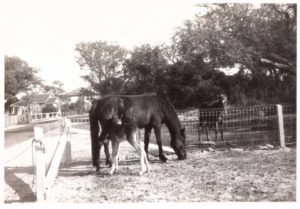 In the 1950s, Boy Scout Troop 290 took over the care and feeding of the ponies and became the first — and last — mounted Boy Scout troop in the United States. At that time, the free-roaming ponies became a point of contention for both Ocracoke Island residents and the National Park Service. The ponies would wander onto the island’s new highway or into unfenced yards and gardens to eat, and the National Park Service feared the ponies’ continuous grazing would undermine their efforts to prevent erosion of the sand dunes that protected most of the island (the ponies would often chew on grasses that had been planted to help stabilize the dunes). It was decided that a portion of the island’s marshland should be dedicated exclusively to the ponies. 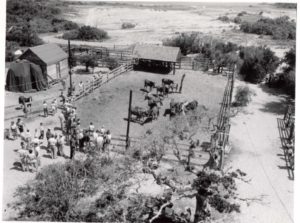 We were proud to be given the opportunity to care for these amazing ponies through our Adopt A Pony program which re-launched last year. For $35 a month, you can partner with us to provide care and feeding for a pony of your choice. In return, you will receive an official adoption certificate and a picture of your pony to keep!

The Ocracoke ponies are truly a special part of Outer Banks history and culture. As our friend Meg said: You could tell the story of the Outer Banks through the horses.