This month, we join with the National Park Service in celebrating and honoring Black History Month by sharing stories about Black history in the Outer Banks and your OBX national parks.

Cape Hatteras National Seashore is famous for its 150-year-old lighthouse, its pristine beaches, its fishing spots and its waves. What you may not know is that Hatteras Island has played an important role in African American history and thus, American history.

As the nation was ravaged by the Civil War in the 1860s, the Union established the Hotel D’Afrique, a safe haven for those who had escaped slavery. Thirteen years after the Civil War ended, the first all African American lifesaving service in the United States was established on Pea Island, which resulted in hundreds of lives being saved in its nearly 70 years of existence. 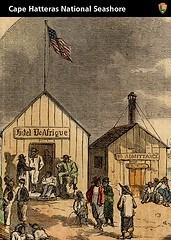 At the beginning of the Civil War, in August 1861, the Union army occupied Hatteras Island, having captured Fort Clark and Fort Hatteras, which were formerly Confederate strongholds. The Confederate army occupied Roanoke Island to the north.

Because the Union was in control of Hatteras Island, it became a place of refuge for enslaved people who were fleeing in pursuit of their freedom. As word spread and more people came to the island, the Union army gave the freedmen work unloading supplies from their ships that sailed to the island; in exchange, the freedmen were provided for as members of the Union camp.

“Shortly thereafter, Union forces constructed ‘Hotel D’Afrique,’ which became the first safe haven for African Americans in North Carolina during the Civil War,” Jonathan Polk, Supervisory Park Ranger with the Interpretation and Education Division in Buxton, said. “This safe haven was the predecessor to the Freedmen’s Colony that was later established on Roanoke Island.”

“Hotel D’Afrique was located approximately just over a mile west of where the Graveyard of the Atlantic museum and ORV Ramp 55 are currently located in Hatteras Village,” Polk said. “Due to storms, tides and overwash there are no visible remains of this building or the Civil War forts that used to be there back in the 1800s.”

There is a sign located outside of the Graveyard of the Atlantic Museum, which bears the inscription:

“Captain Clark has erected a very commodious wooden house on the beach for the use of the fugitives who have recently arrived from Roanoke Island. … Franklin Tillet, the older man who last arrived, came down from Roanoke Island in a boat, bringing with him fifteen of his household….”

In 2013, the site of the Hotel D’Afrique was named as part of the National Park Service’s National Underground Network to Freedom. 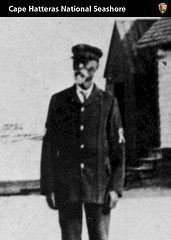 Pea Island National Wildlife Refuge, located within Cape Hatteras National Seashore, is the original site of the Pea Island Lifesaving Station, which was manned by the first all African American crew in the United States, under the leadership of Richard C. Etheridge, a man of utmost integrity and honor.

Etheridge was born into slavery on Roanoke Island in 1842 but was taught to read and write. At the onset of the Civil War and after the Union had taken control of Roanoke Island in 1862, Etheridge left Roanoke Island to fight for the Union. He officially joined Union Army’s 36th Colored Troops in 1863, after President Abraham Lincoln issued the Emancipation Proclamation. Etheridge served valiantly and had risen to the rank of Commissary Sergeant by the end of the war.

When he learned that his family members and friends living in the Freedmen’s Colony were subjected to abuses by the Union army — who failed to deliver on their promises to take care of the freedmen — he wrote a letter with William Benson to the Commissioner of the Freedmen’s Bureau, imploring him to do something about the injustices.

In 1866, Etheridge returned to Roanoke Island. Along with members of the decommissioned Freedmen’s Colony, he bought land, farmed and fished, got married and had a daughter.  He became active in the community and became a county Commissioner and served on the board of education at a time when the schools were integrated. In 1875, he took his first job with the United States Lifesaving Service (USLSS) at the Bodie Island Lifesaving Station as surfman #6.  He stayed in that position until 1880 when he was appointed Keeper of the Pea Island Lifesaving Station, which had been established two years prior. Sadly, Etheridge and his men did not serve without opposition. 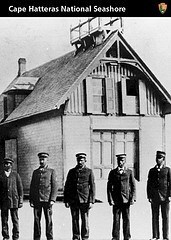 “When he took command of the station, the white surfmen refused to work for him and walked away,” Darrell Collins, President of the Pea Island Preservation Society and whose uncle, Herbert Collins, was the last surfman to serve at the Pea Island Lifesaving station, said. “Shortly after the station burned to the ground Etheridge selected his own crew from African American men who had who served in the Civil War and were expert watermen.  They rebuilt the station themselves.”

Etheridge and his crew made history as the first all-African American lifesaving service in the United States.

“Given the times, Etheridge’s crew endured discrimination” Jami Lanier, Cultural Resource Manager for your OBX national parks, said. “Nonetheless, they put their own lives in danger to fulfill the mission of the United States Life Saving Service to save lives.”

Etheridge was a man of great valor, and he rigorously trained his crew to be able to withstand the often-treacherous weather and water conditions the Outer Banks are known for. Some scholars estimate Etheridge and his crew saved more than 600 lives over the course of 20 years.

“Vigilance to mission and rigorous training made [Etheridge’s] crew one of the nation’s finest and is credited as an early driver of diversity in the U.S. Coast Guard,” Polk said.

Additionally, the men made history by working in tandem with other white lifesaving crews who were stationed along the Outer Banks.

“All the men who worked at Pea Island came from Roanoke Island,” Collins said. “They found equality in life, because they were isolated on Pea Island. And people like themselves were in charge of the station. So, in a sense, although it was segregated, they found purpose in life, which very few people would ever achieve, African Americans, at that time in history. They felt pride and honor in what they were doing and I think that pride and honor spilled over into the white communities.

“When wrecks occurred on the beach, they had to work together with other white stations. The stations were only six miles apart. And at nighttime, when they did the beach patrol, one went north and one went south, and they met the surfmen from the other stations on the beach and exchanged the beach token. I would assume they didn’t just exchange the beach token, but that they had a conversation between themselves. They found that they respected each other, they learned from each other, they worked together and they found harmony because their mission was the same: saving lives together.”

Etheridge’s most famous and most daring rescue came on October 11, 1896, when the ship, the E.S. Newman, wrecked along the shores of the Outer Banks. The ship was sailing from Providence, Rhode Island, to Norfolk, Virginia, when it was blown 100 miles off course in a terrible storm. The E.S. Newman ran aground on the beach, about two miles south of Pea Island, and one of the crew onboard sent up a distress flare. Surfman Theodore Meekins, a member of Ethridge’s crew, saw it and alerted Etheridge.

Etheridge and his men sprang into action. They rowed their surfboat out to the wreck, but the conditions were so bleak that a line could not be fired from the E.S. Newman to the shore.

Then, Etheridge did the seemingly unthinkable. He tied two of his fittest crewmembers together with a rope and anchored them to the shore. The two men then swam out to the wreck, fighting through the roaring waves to rescue the passengers. The captain’s three-year-old son, Tommy, was the first to be brought ashore.  Etheridge’s men returned to their lifeboat victorious, and the process was repeated eight more times — with surfmen taking turns swimming — until all those on the E.S. Newman were saved.

Four years later, in May 1900, Etheridge became ill and passed away while at the station, which continued to operate until its decommissioning in 1947.

On March 5, 1996, 100 years after the wreck of the E.S. Newman and 96 years after his death, Etheridge and his surfmen Theodore Meekins, Benjamin Bowser, Dorman Pugh, Stanley Wise and William Irving were honored with the prestigious Gold Lifesaving Medal for their bravery in saving the lives of those aboard the E.S. Newman.

Etheridge was also honored with a life-sized bronze statue that was erected on Roanoke Island, in Manteo in Collins Park, on May 8, 2010, 110 years after his death, and his gravesite is on the property of the North Carolina Aquarium.

Special thanks to Darrell Collins, Jami Lanier and Jonathan Polk for contributing to this article.