Our Meet Your Ranger series introduces you to the many amazing people who support our Outer Banks national parks every day!

Please tell us a little bit about yourself.

Experience before joining the National Park Service: I spent 20 years in the U.S. Air Force in aircraft maintenance. I was stationed in Tucson, Arizona; Blytheville, Arkansas; and Holland before my final post in Panama City, Florida. Holland was amazing. The people there are fantastic. And I miss the food.

From 1996 to 2001, I was stationed at Tyndall Air Force Base in Panama City, Florida, and trained Aircraft Maintenance Officers. From 1998 to 2001, I was the Superintendent of the schoolhouse for Aircraft Crew Chiefs for the F-15 fighter aircraft, and I was responsible for 14 instructors and over 700 students per year. The students came from Sheppard Air Force Base in Texas, and we finished up their training on live aircraft before they moved to their first duty station. I retired from the U.S. Air Force in May 2001. 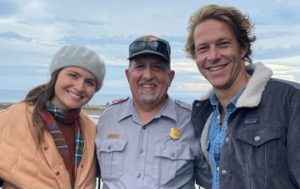 Position in our parks and where you can be found: I am the Special Parks Uses Coordinator for the Outer Banks Group of the National Park Service. I work in the headquarters building at Fort Raleigh National Historic Site most days, but I do get out of the office to monitor permitted activities or to inspect locations.

One of the things I liked the most while working at Thomas Edison National Historic Park was meeting people from all around the world who felt a connection with Thomas Edison, which was really neat. But one of the main reasons why I was there was actually to start up a long-distance learning program. In those very early days, it really didn’t exist.

We had somebody come in from the region and they were talking about setting up a studio because they had done something like that at Ellis Island. And I told him, “That’s really great. But I really want the people to see the resources.” I didn’t want to stay in front of a green screen like the weatherman. So, I branched off and started looking a little bit and we ended up with an iPad and a hotspot, and I took the students on a virtual tour through the laboratory complex, the library, the stockroom and then the phonograph room, where I played two Edison phonographs for the students. We connected with students not just in New Jersey or the tri-state area or the United States — we connected with students around the world. The longest distance learning session I had was with students in Australia.

Currently reading: The late Gen. Colin Powell’s book, It Worked for Me. I read it before he passed away, and now I’m reading it for the second time. If I had a military hero, he would be the person. He was just an amazing man. But he was down to earth, as a four-star general. I highly recommend the book.

What do you like to do in your free time?

I like to spend time on the beach with my wife, Patty, and our dog, Wesley — he’s a rescue beagle-dachshund mix we’ve had for almost 12 years. My wife loves to go shelling, so I do that with her.

What do you like most about the Outer Banks?

The beaches and the slower pace. After living in New Jersey and experiencing the fast pace, it is nice to slow down. I used to have to drive 50 miles a day when I worked at Thomas Edison National Historical Park. Now, I only have to drive three. 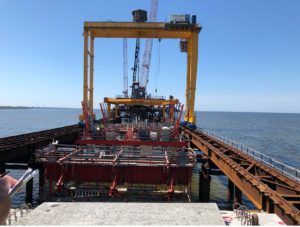 When I retired from the U.S. Air Force, I was I was told by a senior NCO, “I just want to let you know right now: You’re going to have three jobs before you find the right job.” He was right.

I left the military and worked at Home Depot for a while. Then I worked at W.L. Gore, which manufactures Gore-Tex fabric. I was working on the medical side, and we were extruding tubing for minimally invasive surgery. It was really interesting. I was working on the R and D side helping the engineers to come up with better products.

One of my coworkers had been working there almost his whole life; he had been in the U.S. Air Force but got out after four years. As we were watching tubing come off the conveyor belt one day, inspecting at the same time, we got into a conversation. And he asked me, “If you weren’t working here, where would you like to be?” I mentioned I’d like to be a Park Ranger because I love to work outside and to interact with people. The job I had was inside a building with no windows. Six months later, I applied for an Interpretive Ranger position at Thomas Edison National Historical Park and was hired on — that was almost 12 years ago.

What does a typical workday or work week look like for you?

I don’t think there is anything typical about my workday or work week. I could be in the office or out in the field working permits for weddings or sporting events for all three national parks. I could be out in the field looking at a location with the North Carolina Department of Transportation (NCDOT) on an upcoming project. I could be with the utility providers working on their right-of-way permit. I could be consoling someone wanting to fulfill their loved one’s last wishes and have their ashes spread somewhere in the park — those are the toughest phone calls. I could also be working with business owners for their commercial use authorization permit to allow them to conduct business in the park.

One of the most interesting phone calls I’ve had in my three years here was a guy who called and said he knew where Blackbeard’s treasure was buried. He said, “I was at a seance in New Orleans, and he told me where the treasure is buried on Ocracoke. I’d like to get a permit to dig up the treasure.” I said, “I’m sorry, I can’t give you a permit for that.” He offered to share the treasure with the National Park Service. When I told him he couldn’t dig, he said, “I can’t believe you guys are passing up this great opportunity. I guess I’ll just have to keep that secret to myself.” And I said, “Yeah, or pass it on to your next kin and let them know.” He was as serious as he could be. You just never know who’s going to be on the other end of the phone.

What do you enjoy most about working in our Outer Banks national parks?

I get a chance to work in all three national parks, and I get the chance to work and talk with all of the rangers. They give me the insight and perspective I need as I write the permits. It is never the same thing and can be very challenging. It can always make for some interesting days.

What is your favorite memory from working in our Outer Banks national parks?

I don’t think I could pinpoint one favorite memory. In my three years here, there have been many. The 50th anniversary of the moon landing event at Wright Brothers National Memorial was great since I remember that as a kid. I recently worked on a film permit for “One True Loves,” and I met Phillipa Soo and Luke Bracey, the lead actress and actor. 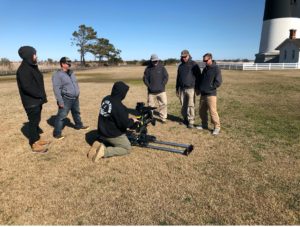 I also handled the film permit for “Wicked Tuna Outer Banks.” I didn’t go out on the boat, but I met some of the boat captains and listened to their stories. I enjoyed walking out on the old Bonner Bridge, which is now a fishing pier, and walking out on the new Jug Handle Bridge that is currently being constructed.

Why are our Outer Banks national parks important?

This is probably one of the few places where there are three national parks in one area. I like that we are known as the “National Parks of Firsts”: first National Seashore in the United States, first in flight, the first Freedmen’s Colony, the first all African American lifesaving service in the United States and the first child born to English parents in the “New World.”

Our parks are definitely not something any of us should take for granted. They talk about the history of us: the good, the bad and the ugly. It’s very important that we understand our history and try to put ourselves back into that time and place to understand what was going on.

Is there anything else you’d like people to know about you or our parks?

My wife and I visited the Outer Banks about 12 years ago and spent a week here in the off-season. We visited Wright Brothers National Memorial, Fort Raleigh National Historic Site, the Bodie Island and Hatteras Island lighthouses on Cape Hatteras National Seashore — even though they were closed for the season — and even took the ferry out to Ocracoke Island to see that lighthouse. At the end of our week here, on our drive back to New Jersey, we both said we really liked the area and thought this would be a great place to work. I applied for the Special Use Permits Coordinator position in 2018 and got the job. The rest is history!