This month, we join the National Park Service and park partners around the country to celebrate Women’s History Month. Your OBX National Parks are the birthplaces of legacies that have allowed women to do what was once thought to be impossible. Your park staff work diligently to ensure these stories are preserved and shared with generations to come.

Ranger Ashley from Wright Brothers National Memorial recently had the opportunity to interview Dorothy Cochrane, curator of the National Air and Space Museum, Smithsonian Institution, about the Women Airforce Service Pilots (WASPs) who served on the American home front during World War II. Below is an edited transcript of their interview. You can watch the full interview on the Wright Brothers National Memorial Facebook page.

Ranger Ashley: Could you give us a brief overview of what the WASP program was and how it got started? 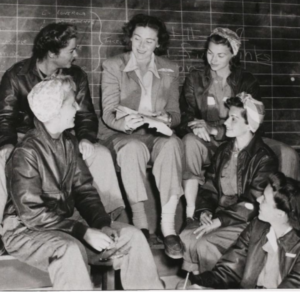 Dorothy Cochrane: “WASP” stands for “Women Air Force Service Pilots.”  These were civilian women who were allowed to fly military aircraft on the domestic home front during World War II. In a nutshell, the idea was because so many male pilots were headed off to war in both the European and Pacific theaters, there needed to be more pilots available at home to move aircraft around the country, either from manufacturers to bases or ports of demarcation to go overseas. The initial idea was to have a group of women who could fly airplanes on the domestic front.

How were the women selected for this program? What was their drive and motivation to participate?

There were a couple of 100 women who had their pilot’s licenses prior to World War II, certainly in the 1920s and 30s. There were some famous women like Amelia Earhart and Louise Thaden. But there was also Jacqueline “Jackie” Cochran, who was a very famous racing pilot from the era, and Nancy Love, who was also a very well known racing pilot.

They flew in the 48 states of America that were the United States at that point. …None of them flew overseas; they were not allowed to leave the country and fly overseas.

There was one point where Nancy Love had hoped to fly a B-17 to England and she was actually stopped at the last second, not allowed to leave the country. There were very strict rules on that. These women were civilians, but they were flying under military instruction under military operations. So they had to follow the military; they had to follow the generals and their lieutenants, and the colonels, that sort of thing. They were an independent organization, but they were organized under civilian civil service flying under military code. So that’s the main thing that they could not do.

As they started out, they were ferrying aircraft. And a lot of these were trainer aircraft – everything from Piper Cubs through basic trainers to advanced trainers. They started once they had gone through their training programs and gained experience; those who already had a lot of experience were allowed to fly more complex airplanes. So every time one of them jumped into the next level, like a pursuit plane, that was something new that was a breakthrough. Eventually, they were able to fly the larger bombers as well. 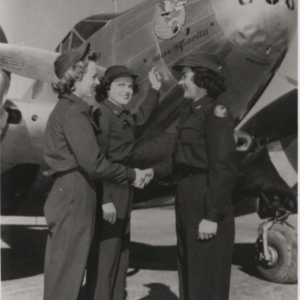 They flew every military aircraft in the inventory. They proved women could fly all types of military aircraft. And then they went beyond just ferrying aircraft and did flight instruction. They towed targets for aerial gunnery practice. They did all kinds of transport for cargo and personnel. They branched out, and Jackie Cochran was especially interested in branching out to prove that they could fly any kind of military mission, as required.

Of course, they were never going to be allowed into combat or anything like that. So, that was never any part of what they were doing at the time.

Was there a conversation at the time that women could never fly large planes?

That was absolutely part of a bigger conversation. There were a lot of people in the military who didn’t think they should be there in the first place. And they expected the women to do poorly.

…A lot of these women were barely five feet tall or five feet five, and just think of them sitting in a giant bomber. And they did sometimes put blocks on the rudder pedals and things like that to be able to reach everything.

…The idea was that from from the beginning of flight, it was not a feminine thing: it was a masculine thing. [It was thought] women wouldn’t be able to think fast enough or be able to physically control the aircraft. There was an ingrained idea that it was not proper for a woman to do that and she didn’t have the wherewithal. So [the WASPs] set out to disprove all of that and they did very, very handily.

When they did their training, their washout rate was the same as men. They were trained by military pilots so they were trained in the military way. and they were able to accomplish all of it. It was just a matter of them step-by-step, airplane by airplane, flying in bad weather, thinking outside of the box when something went wrong, how to get out of a situation – they proved they could do all that.

How widespread was the knowledge of [WASPs] during the war?

Both Jackie Cochran and Nancy Love knew a number of women who were ready for the program. They put out the call. Nancy Love was looking for women who had at least 500 hours flight time and a commercial flight rating. They had to be pretty good pilots, and these women had been flying for a while. When Jackie started the training program, they wanted women with 200 hours. But eventually, they brought it down to about 35 hours, because they were going to take them through everything from basic to advanced training anyway.

So you had different levels of women who came from all parts of the country. When the word went out, 25,000 women applied. They were women who wanted to contribute to the war effort. Some of them had wanted to fly all their lives, like Ann Carl and Dora Dougherty and others. Some, like Bernice Falk Haydu, really only learned just as the war was starting. She had been kind of casting about, like “What do I want to do with my life?” She did some clerical work and this and that and then she decided that was really boring, and then she started taking flight lessons.

So there were all these women around the country, and they started to make headlines in the local papers. Everyone started talking about them locally and eventually Life magazine did several spreads on these women. They became extremely well known down to at Sweetwater, Texas Avenger Field, where they were training. Life magazine went down there and did all kinds of photo essays on them. 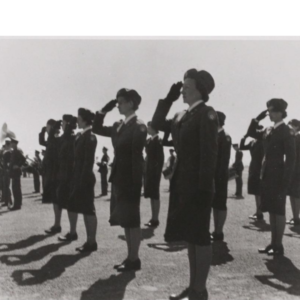 What artifacts do you have from the WASPs at the National Air and Space Museum?

At the Smithsonian, we have a WASP uniform that was donated by Beatrice “Bee” Fauk Haydu, Having turned 100 in December, she died in January. She was a longtime friend of the museum. She actually came to the museum in the 1960s with her son. As she walked through – and this was before the building that is on the National Mall now – she noticed there was nothing on the WASPs. And she was was like, “This is terrible; we’ve got to do something.” And so she talked to the curator at the time and he said, “Well, give me something,” so she donated her entire uniform.

Once we opened the museum on the National Mall in 1976, her uniform was up from the time it opened until we had to close for our recent renovation. We are going to put her uniform back up again; it’s the beautiful Santiago blue uniform that Jackie Cochran had designed especially for the WASPs. We’ve also got an A-2 leather jacket, one of the famous World War II bomber jackets. I just recently collected that from another WASP. We’ve got scrapbooks, we’ve got all kinds of their pins, the Fifinella patches and wings. It’s a marvelous collection of what these women did. It’s a joy to have all of these. We also have parts of outfits from several WASPs, including Jackie Cochran.

After the war ended, what changed? Were there immediate impacts, positive or negative, for women pilots?

The main thing the WASPs did was prove that women could fly military aircraft. That never had to be proven again really; it did and it didn’t. It was always there, but later generations kind of forgot about the WASPs a little bit, and that’s a whole another story about how they they worked on that, but women actually were not allowed into military aviation until the 1970s.

…So at that point in time, it became more of a legal, cultural, social battle. Now every time a woman in the military was allowed into a new aircraft, there were people who still didn’t think they belonged there and didn’t think they could fly these aircraft. But the great legacy of the WASPs was that they had proven that given the right training, given the same training they had during World War II, current women could also become great pilots.

It was a fight back then for these women. At the end of the war they wanted to be incorporated into the Army Air Service. And that just never happened. And they’re alive. It was a complicated situation, a lot of reasons for it. Ultimately, about 150 women did go into the Air Force Reserve later, once the Air Force was established. But they were not allowed to fly; they were only in as reserve officers doing other capabilities.

So, on the one hand, they did this great thing, proving that women could fly military aircraft. But then the whole thing was forgotten until the legal and social and cultural times changed, most especially the Civil Rights Act and the feminist movement.

The marvelous thing about the young women who started in the 1970s was that they immediately recognized that they were starting on the shoulders of the WASPs. And there was a great, great camaraderie between those older women, who were being kind of rediscovered at that point in time. The WASPs were demanding that they be given veteran status because they had flown military aircraft, and they needed it for their retirement. …And they knew that people didn’t know who they were anymore, so they mounted a years long effort. It took about six years to get this veteran status, which was finally acquired in 1977. And that’s just when women were being accepted first into the Navy, and the Army and then the Air Force, and eventually the Marines and the Coast Guard. 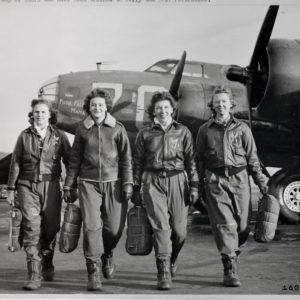 It came together really well; the WASPs were finally recognized just when these new women were coming in, and they could work together and draw upon each other’s experiences. …That just shows that foundation, the legacy. It was the launch point for all these women now flying in military aviation.

For more information on the WASPs, you can visit: airandspace.si.edu/gsearch/WASPs