The Tuskegee Airmen: A Legacy of Excellence and Perseverance

This month, we join the National Park Service and park partners around the country to celebrate Black History Month. Your OBX National Parks are vitally important to Black history in the United States, and your park staff work diligently to ensure these stories are preserved and shared with generations to come.

*As you read the transcript or watch the video, please be aware that you will read and hear stories of racism in various forms, including derogatory speech, manipulation and abuse. These stories are shared to provide a deeper context for the experiences of the Tuskegee Airmen.

Ranger Ashley: For those who might not be as familiar with this topic, can you give us an introduction as to who the Tuskegee Airmen were and how they got started?

Frank Toland: The Tuskegee Airmen were the first African American pilots to fly for the United States Air Force — military. Back then, they were called “Army Air Corps.” They were the precursors to the Air Force. And then, of course, before the Air Force, they were the “U.S. Army Air Forces.”

Before [World War II], in 1925, there had been a study that had been done called the “Army War College Study for the Use of the Negro in Wartime.” Basically, the study made a number of racist assumptions. It said that African Americans were not intelligent enough, skilled enough or brave enough to do any technical things like be pilots or tank operators or aircraft mechanics or anything that required that type of skill. And basically, even if they could do it, that they were not brave and they would run. This beside the fact that in every war that America has been in — even before it was a country –there have been African Americans that have served with distinction.

But 1925 was during a period known as the “Nadir” period that came right after the end of Reconstruction, where race relations in this country were basically at their worst. …Most of the Airmen were born into that period of the early 1920s. …You had racism all around the country, but it was especially oppressive here in the South.

…1940 was an election year. President Franklin Roosevelt was running for an unprecedented third term and he needed Black votes to win in the urban cities. So he made the promise that if he was re-elected, then he would set up a unit for Black soldiers. …What groups in the Black press and Black pilots wanted was desegregated service. But Roosevelt wasn’t able to swing that with the obvious resistance of the military at that time to desegregated services. But he was able to start what they called “experimental” or “token” Black units, the 99th Pursuit Squadron for the Tuskegee Airmen, which started in Illinois…to train the technical people — the mechanics, meteorologists, parachute riggers, navigators, all those folks, because even before you have pilots, you have to have all the technical people. If you don’t have mechanics, the planes aren’t going anywhere. If you don’t have meteorologists, you don’t know when it’s good weather to fly.

…So after completing their training, they were transferred to Maxwell Air Force Base in Montgomery, which is right near Tuskegee. But while this was going on, of course what was going on in Europe was the beginnings of World War II. In answer to that, President Roosevelt had started a program known as the “Civilian Pilot Training Program.”

The “Civilian Pilot Training Program” was based on programs that had actually started in Europe, where they would train civilians as pilots so that if there was wartime emergency, you would already have civilians who were trained as pilots; and so it was easier to train them from civilian planes to military planes instead of starting from scratch.

The first year [in the United States] it was just at white institutions. But by the second year, it had been expanded to include six African American colleges, including Tuskegee, Howard, Hampton, and a few others, to Black-run flight schools in Chicago. And the graduates of those programs formed the nucleus of the Tuskegee Airmen program.

When did the Tuskegee Airmen go into battle? What did that look like?

They first went into battle in North Africa. What they had them doing was strafing at ground targets, blowing up weapons depots and trains and things of that sort. Basically, the things pilots hate doing the most. Eventually, after they had shown how good they were…they were able to prove their mettle, so to speak. 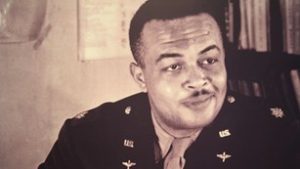 But before that, there had been an attempt by the white commander whom they were flying under, William “Spike” Momyer, to have them removed from combat for “lack of aggressive spirit,” he called it. Basically another way of saying they were cowards. …Some commanders didn’t want the program to succeed, so they tried to find ways to undercut it, not just overseas but also here at home.

They did luck out here at Tuskegee Army Airfield when they finally got Colonel Noel Parrish from Kentucky. He was not racist. He really wanted the program to succeed, and he believed in equality.

…The previous commander, Colonel Frederick Kimble, had put up segregated signs over the base. One of the first things Col. Parrish did was remove all those signs, so everything was integrated.

You talked about how the Tuskegee Airmen had to fight to get the chance to go into the field. Once they started having successes in the field, did things change? What happened after the war?

During the war, the other bomber crews would request them. That’s why Colonel Davis named later named his plane “By ReQuest,” because all of these bomber crews started asking for them…The Tuskegee Airmen had about 180 bomber escort missions and they lost only about 25 to 27 bombers, and the average for bomber loss was about twice that. You were most likely to come back alive if the Tuskegee Airmen were protecting you.

…The pilots did receive several awards: three distinguished unit citations, various flying crosses, things of that nature. The problem was, of course, when they came back to the United States after the war, they came back to a segregated country. …If you were a pilot or mechanic, if you were an African American who was a “Red Tail,” you didn’t get a chance to go fly for United or American or be a mechanic for them.

…That’s why so many, not just Airmen, but so many of the World War II generation got involved in the Civil Rights movement, because they had sacrificed for this country.

We know now, looking back at the Tuskegee Airmen, that what they accomplished left a huge impact. Did their accomplishments aid the desegregation of the military?

It did. I think it was one of the major reasons why Truman, in 1948, desegregated the military, because of what happened with the Tuskegee Airmen.

The 761st Black Panther Tank Battalion had served so well, and they had such a high loss of life over there. They were fighting the pack and some of the biggest and worst battles of
the war. They had a very high death rate. Then, when they came back, there were several controversial lynchings of World War II African American soldiers.

…A young man who was a soldier was beaten so bad he was blinded in both eyes, just for trying to go to the bathroom at a bus stop.

And then there was another case I read about with Hosea Williams, who of course later became Rev. Hosea Williams with Rev. Dr. Martin Luther King, Jr. He had been the only member of his unit to survive a Nazi bombing. And then he came back to this country and he got beaten almost to death just for taking a drink of water out of a white water fountain.

He comes back to United States, and on his way back to Atlanta, he gets beaten almost to death. The only reason why they stopped beating them is because they thought he had died because his pulse was so faint.

He talked about how after that he [wondered], “What did I fight for? Why did I even go over there? Was I even on the right side?”

Many of [the Tuskegee Airmen] either stayed in the military — they still wanted to fly or be mechanics. Some of them became active in the Civil Rights movement, or in business or in some other field and made big changes there. But they did things to move the situation forward.

As you work to tell this story regularly at the park, what are you most proud to share about the Tuskegee Airmen?

I would say their perseverance. And the things they did made it possible for some of the things that happened later, not just in the military. 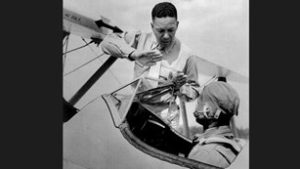 …To hear some of the Black astronauts who have talked about what an inspiration [the Tuskegee Airmen] were to them. …All the people we have — we have two military bases nearby — who come in, regardless of race, and talk about what an influence the Airmen were.