This article, written by your parks’ Cultural Resource Manager Jami Lanier, was originally published in the 2020 In the Parks newspaper, available online here and at your parks’ Visitor’s Centers. 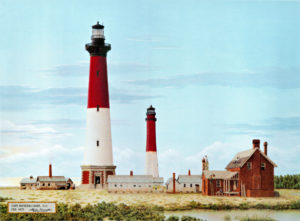 Drawing by Stephen Harrington. When it was built in 1870, the Cape Hatteras was painted red and white. The 1854 lighthouse is shown in the background, before it was demolished

The necessity of a lighthouse at Cape Hatteras has long been recognized. The shallow diamond shoals formed by the convergence of the Labrador Current and the Gulf Stream were, and continue to be, a navigational hazard. A lighthouse warns seagoing vessels to keep their distance from these dangerous sandbars… or else end up in the Graveyard of the Atlantic!

The first lighthouse at Cape Hatteras, completed in 1802, was a 90-foot tall sandstone tower. The lighthouse was just tall enough so that the light was often engulfed in fog! Even under normal conditions, the light was not strong enough and the natural sandstone color was not distinguishable from the surrounding vegetation to adequately warn ships. In 1851, Lieutenant David D. Porter of the U.S. Navy wrote, “Hatteras Light, the most important on our coast, and, without doubt, the worst light in the world.”

In 1854 the lighthouse received a 60-foot addition and a revolving first order Fresnel lens, making the focal plane of the light 150 feet above sea level. Additionally, the lower portion of the lighthouse was whitewashed to distinguish it from the surrounding vegetation, and the upper portion was painted red to make it more visible from the sea. At the end of the Civil War the “second” Cape Hatteras Lighthouse was in need of costly repairs, but District Engineer W.J. Newman commented “…that the condition of the tower is such that it is not worth the contemplated outlay, but rather that an appropriation be applied for, to build a new tower… The structure is quite out of date and liable sooner or later to [be] a disaster.”

Thus, on March 2, 1867 Congress appropriated funds “for rebuilding the first-class light-house at Cape Hatteras” and the third incarnation of the Cape Hatteras Lighthouse was completed in 1870. The new 198-foot tower was outfitted with the First Order Lens originally installed in the 1854 lighthouse and the light was first exhibited on December 16, 1870. The new lighthouse was painted in the same red and white color scheme as the previous tower. It wasn’t until 1873 that the Cape Hatteras Lighthouse was painted with the distinctive daymark of black and white spiral stripes that is so familiar to us today.

2020 marks the 150th anniversary of the completion of the Cape Hatteras Lighthouse. The sentinel has withstood countless hurricanes, survived a 2900-foot move inland, and has hosted hundreds of thousands of visitors who have climbed its steps to be rewarded with a view of the mighty Atlantic Ocean and the dangerous shoals at Cape Hatteras. The National Park Service is proud to be entrusted with the stewardship of the Cape Hatteras Lighthouse and will continue to manage this iconic historic structure for future generations to enjoy.

Save the date! We are proud to partner with the National Park Service and the Outer Banks Lighthouse Society to celebrate this important anniversary on December 16, 2020. Join our email list to be the first to know how you can celebrate this event virtually with us.