Position: Chief of Resource Management and Science for the National Parks of Eastern North Carolina (I work in five parks!)

Where you’ll find her: On the road in my government vehicle – I travel all the time to Cape Lookout, Moore’s Creek and throughout Cape Hatteras National Seashore!

What do you like most about the Outer Banks?

I love the sounds and sights of the ocean, the scenic sound-side, the abundant wildlife that we have, and most of all, baby hatchling turtles! 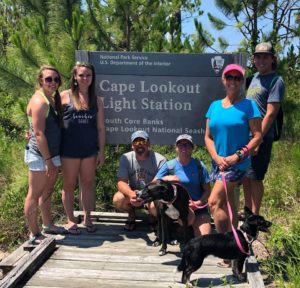 What does a typical workday look like for you?

The main thing about my position is that I have five national parks in eastern North Carolina. So not only do I have Cape Hatteras National Seashore, Wright Brothers National Memorial and Fort Raleigh National Historic Site, but I also work at Cape Lookout National Seashore and Moore’s Creek National Battlefields. I travel to Cape Lookout at least once a month because I supervise staff there and I’m the chief of resource management there.  I’m always on the road.  So, a typical workday? I don’t know—every day is untypical!

The majority of my job is fostering more science in our parks. It’s the best part of my job, other than working with the great team members that I have. A lot of my typical work is talking to researchers about how they can do a project in our park or study our wildlife or implement science that’s important for management decisions. We have a lot of science related to the off-road vehicle management plan that that we want to accomplish. And so that’s my main priority, trying to get science related to off-road vehicles.

What is your favorite thing about working in our OBX national parks?

I love the team of people that I get to work with! My Biological Technicians on staff are some of the smartest, greatest and most motivated people I’ve ever worked with. Our management team is also amazing, so I love working with them.

I also love the opportunity I’ve had to build a science program here, which I’m in the baby steps of right now. There’s a lot of potential and now I am moving my focus towards incorporating more science happening in the park and even getting our own staff to do science in the field. They were monitoring birds’ nests and turtle nests, but now they’re participating in science projects related to least tern colony development.

We’re also going to do some in-house habitat modifications by applying herbicides to plants that are growing around the Cape Point salt pond. Hopefully, when we take that vegetation down, it’ll turn into a sandy beach habitat and become a Piping Plover habitat.

What inspired your career with our national parks?

I grew up in Maryland on the Chesapeake Bay, and from the moment I could talk, I wanted to be a Marine Biologist. I wanted to work on the water, particularly around beaches.

I went to graduate school and became a Marine Biologist and went to Duke University for my Ph.D. I thought I would always go back to Maryland and work on the Chesapeake Bay but from Duke, I got my first job at Everglades National Park down in Florida. I worked at Everglades for the first eight years of my career, but I always wanted to come back to North Carolina because I went to graduate school here and had a great experience here.

What is your favorite memory working at our OBX national parks?

My favorite memory is going down to Buxton and Will, one of our Biological Technicians, saying, “There’s a bunch of baby turtles we need to release tonight.” And I said, “Can I go with you?” And him and his wife, Amy, and I released these baby turtles into the most beautiful sunset in South Beach. There were so many baby turtles and they were so cute!

Why are our Outer Banks national parks important?

Fort Raleigh National Historic Site and Wright Brothers National Memorial are entrenched in this amazing history! It’s the foundation of North Carolina, basically. Fort Raleigh was the first colony that came from England and settled here. And then Wright Brothers signifies the discovery of flight inside our state. Cape Hatteras National Seashore is this beautiful seashore with incredibly scenic views and soundscapes and night skies. And all the abundant wildlife that we have here in Cape Hatteras is one of the reasons that people should cherish that park as well.

Is there anything else you’d like people to know about you or the parks?

We are working with the University of North Carolina Wilmington research team to study our least turn colonies related to pedestrian and vehicle use near their colonies. Right now, in our science plan, they have an incredibly large buffer distances set aside. The science we used to determine this buffer distances was more about distance from colonies by boats on islands. And we don’t think that that’s relevant to our wildlife here, so we’re trying to study how vehicles or pedestrians affect the colonies here. So, that study is starting this summer and it’s part of our off-road vehicle management plan study. And that’s really important.

On a fun personal note, I was on the show Beachfront Bargain Hunt when I first moved here to the Outer Banks and was buying my house! (Check it out: Season 24, Episode 4!)