Get wild with your OBX wildlife!

Happy World Wildlife Day! The Outer Banks and your OBX national parks are home to a variety of wildlife so to celebrate we wanted to introduce you to some of the amazing creatures that call the barrier islands home! 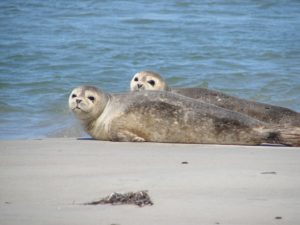 There are four types of seals that can be found along the beaches of Cape Hatteras National Seashore: Harbor seals (Phoca vitulina), Gray seals (Halichoerus grypus), Hooded seals (Crystophora crista) and Harp seals (Pagophilus groenlandica). The Harbor seal is the type of seal that is most common to the Outer Banks.

“The colder, northern waters of New England and Canada are home to multiple species of seals that reside there year-round. Seals will travel away from these areas in search of food when ocean conditions (temperature) are favorable. When ocean temperatures on the Outer Banks plummet during winter and spring months, seal sightings are a common occurrence at the Seashore. Most seals observed at the Seashore are young animals, approximately four months to two years old, and as such are often in various stages of body condition.”

When a seal leaves the ocean, it is referred to as “hauling out.” According to your park staff at Cape Hatteras National Seashore, “Seals can be found ‘hauled out’ to rest, avoid predators and for thermoregulation on Seashore beaches.”

About Me: Sea Turtle 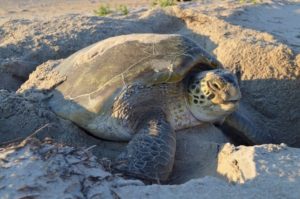 According to your park staff at Cape Hatteras National Seashore:

“Sea turtles, some of the largest living reptiles, are long-lived, cold-blooded, air breathing, migratory, and spend almost their entire lives in the sea. They range in size from the smallest species weighing 75-100 pounds to the largest species weighing almost 2,000 pounds. Visitors can tell the difference between a land or pond turtle and a sea turtle by their front limbs. Sea turtles have flippers, whereas land and pond turtles have feet with claws.”

“Sea turtles were placed under the protection of the ESA [Endangered Species Act] including the five species found in the Seashore’s waters with the Kemp’s Ridley, Leatherback and Hawksbill listed as ‘Endangered,’ the Loggerhead as ‘Threatened,’ and the Green as ‘Threatened’ in its entire range except in the breeding populations in Florida and on Mexico’s Pacific coast, where it is listed as ‘Endangered.’”

Last year, there were 326 documented sea turtle nests at Cape Hatteras National Seashore, which broke the 2016 record of 325 nests!

The Green sea turtles and Loggerhead sea turtles are the two types of sea turtle that are most commonly spotted on Outer Banks beaches. 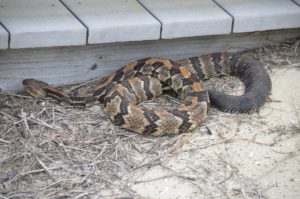 To date, there have been at least 14 different species of snakes documented on Cape Hatteras National Seashore. The Timber/Canebreak rattlesnake is the only rattlesnake that has been observed in the Outer Banks so far.

According to Paul Doshkov, a Biological Science Technician on Bodie Island, “The timber rattlesnake is listed in North Carolina as a ‘Species of Special Concern’ and can be found within the maritime forests of eastern North Carolina. Habitat encroachment by humans is a threat to this species, as we typically find them dead on roadways. Please remember to watch for reptiles and drive carefully to avoid striking any wildlife in general that may attempt to cross roadways.”

Timber/Canebrake rattlesnakes are venomous, so if you see one, make sure to admire it from a safe distance!

About Me: Peregrine Falcon (Falco peregrinus) 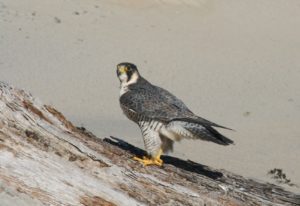 The mighty Peregrine falcon can be found in abundance throughout Cape Hatteras National Seashore, especially during the fall and winter months, according to Doshkov.

The National Wildlife Refuge System reports that Peregrine falcons can range in size from 15-21 inches long, with a wingspan of 40 inches long! They have “a dark blue to slate gray back, white throat, black facial markings, and spotted or barred belly.”

The Peregrine falcon was considered “Endangered” in the 1970s because the pesticide DDT had detrimental effects on falcon eggs. Thankfully, Peregrine falcons are no longer endangered!

The Peregrine falcon is thought to have the fastest speed of all birds when diving—it can dive at speeds from 124 to 242 miles per hour!

About Me: Piping Plover (Charadrius melodus) 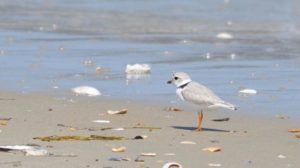 The Piping Plover is a small, sandy-colored bird with that can be found along Outer Banks beaches, especially on Pea Island. It is easily recognizable for its speed—Piping Plovers often race along the shoreline. This bird earns its name from the “peep-lo” sound that it makes. You will often hear a Piping Plover before you see one!

According to your park staff at Cape Hatteras National Seashore, the Piping Plover is a solitary nesting shorebird, which means it makes its nest and lays its eggs in the sand, away from other birds. Piping Plover chicks are born fully feathered and are able to fly at four to five weeks old!

Piping Plovers are a protected species. 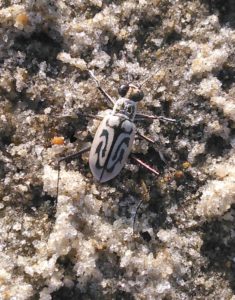 This beach-dwelling beetle spends its entire life in the sand. The striking pattern on its back makes it a truly unique creature.According to the a report compiled by Amy Etherington, C. Barry Knisley and Britta Muiznieks, the Southeastern Beach Tiger Beetle has been observed in southern New Jersey, near Miami, Florida, and in many coastal areas in between. Over the years, populations of the Southeastern Beach Tiger Beetle have dwindled due as a result of increased vehicular and human activity. The beetle can now only be found in Maryland, Virginia, the barrier islands of North Carolina, South Carolina and Georgia, and in parts of Florida.

Thankfully, there are documented populations of the Southeastern Beach Tiger Beetles in the Outer Banks. They can be found on the southernmost beaches Cape Hatteras National Seashore and on the extreme ends of Ocracoke Island from June through September.

Did You Know?
The Southeastern Beach Tiger Beetle is considered a “Threatened” species. 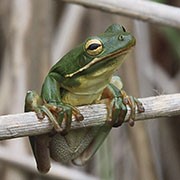 This tiny frog (the average adult is about 2 inches long!) can be found throughout the southeastern United States.

According to the North Carolina Wildlife Resources Commission, American Green Treefrogs prefer coastal and wetland habitats. Their coloring, which ranges from bright green to a more muted or olive green, with a characteristic ivory or yellow stripe along their jaws and sides, can make them tough to spot in the wild.  They are normally seen on man-made structures.

After Hurricane Florence in 2018, the Outer Banks experienced an over-abundance of American Green treefrogs! These frogs typically breed in standing water, which was plentiful in the Outer Banks at the time. 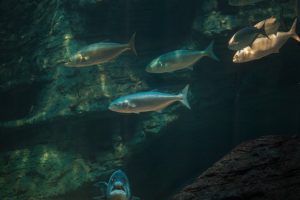 One fish, two fish, red fish, blue fish! While Dr. Seuss wasn’t writing about fish that swim in the waters off the Outer Banks, bluefish are common here.

According to NOAA Fisheries, “Bluefish are blue-green on the back and silvery on the sides and belly. They have a prominent jaw, with sharp, compressed teeth. … They exhibit feeding behavior called the ‘bluefish blitz,’ where large schools of big fish attack bait fish near the surface, churning the water like a washing machine. They feed voraciously on their prey, eating almost anything they can catch and swallow.” Additionally, bluefish can live to be 12 years old can grow to be around 30 pounds.

The next time you visit the Outer Banks and your OBX national parks, keep an eye out for some these local residents!