An Unlikely Friendship: Paul Laurence Dunbar and the Wright Brothers

This month, we join with the National Park Service in celebrating and honoring Black History Month by sharing stories about Black history in the Outer Banks and your OBX national parks.

Dunbar, far left back and Orville, center back.

In 1890 at a small rural high school in Dayton, Ohio, an unlikely friendship was born between Orville Wright and an aspiring African American poet, Paul Laurence Dunbar.

Dunbar was born in Dayton, Ohio, on June 27, 1872. He was the only African American student in his class at Ohio Central High School. As he had a gift for the written word, he was the editor of the school’s newspaper and also participated in the literary and debate societies.

In those early years, Paul and Orville often used their talents to help each other with class assignments – Paul having a talent for writing and Orville making easy work of math and science.

Orville was entrepreneurial from a young age – he started a newspaper of his own, West Side News in April of 1890, and soon made his elder brother, Wilbur, editor. Dunbar desired to pursue a career in journalism and also created his own newspaper for distribution in Dayton’s African American community, the Dayton Tattler, which Orville printed in December of 1890. 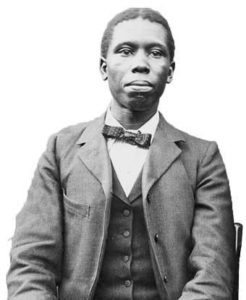 While the Wright Brothers would not become well known until 1903, Dunbar gained notoriety a few years after graduating from high school. Unfortunately, Dunbar’s dreams of being a journalist did not materialize right away, as he did not have the funds to further his education and he was barred from the majority of jobs in the area because he was African American.

According to a biography on Dunbar’s life published by Wright State University, Dunbar worked as an elevator operator while continuing to write poetry and short stories.

In 1892, one of Dunbar’s former teachers invited him to speak at the Western Association of Writers convention in Dayton. Dunbar’s experiences during and after the convention led him to self-publish his first book of poems, Oak and Ivy, in 1893: “he sold the book for $1 to people riding in his elevator, eventually recovering his initial $125 investment.”

Dunbar’s work quickly became popular, earning him the acclaim of many, including that of Frederick Douglass. As Dunbar’s work became more widely known, he traveled around the United States and England giving readings.

A gifted and ingenious young man who never gave up, Dunbar launched a literary career that spanned 14 years and shaped both history and American literature.

The National Park Service recognizes Dunbar as “…an American poet and author who was best known in his lifetime for his dialect work and his use of metaphor and rhetoric, often in a conversational style. In his short career, he produced twelve books of poetry, four novels, four books of short stories, and wrote the lyrics to many popular songs. Dunbar became the first African American to support himself financially through his writing.”

Dunbar passed away at the age of 33 at his mother’s home in Dayton in 1906, after a battle with tuberculosis.

To learn more about Paul Laurence Dunbar and his legacy, you can visit the Flight Room at Wright Brothers National Memorial or visit his home, which is now a part of Dayton Aviation Heritage National Historic Park.