Update: Your park has announced that NASA astronaut Eric Boe will be the special guest speaker at the event on July 20th! Click here to read the park’s official press release.

We are excited to help the park and several local partners celebrate the 50th anniversary of the Apollo moon landing! The Outer Banks has a special connection to this great achievement. Not only is OBX one of the birthplaces of powered flight, 50 years ago at Wright Brothers National Memorial hundreds gathered at your park to watch man’s first steps on the moon.

This month you will have several chances to go back in time and explore how the Wright Brothers’ innovation led to this historic moment in the history of mankind, and how far we’ve come since then. Mark your calendars for these great events! All events are free and open to the public. 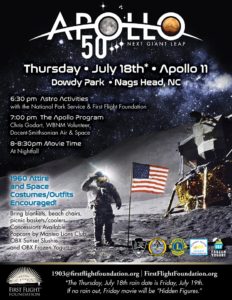 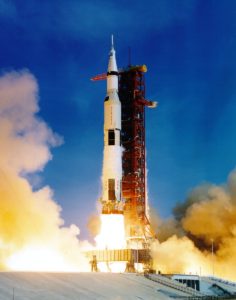 Build your own rocket and watch it fly at sunset!

Join Jockey’s Ridge State Park rangers and Friends of Jockey’s Ridge on Friday, July 19th to learn about the lunar landing and build and launch your own homemade rocket.  Learn about the science behind the rocket launch that led to the historic moon landing 50 years ago!

7:00pm – kids’ activities including a station to build your own homemade rocket.

7:45pm – group rocket launch just before sunset at 7:45 followed by Sunset on the Ridge ranger program 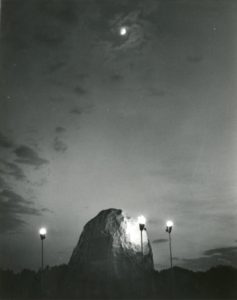 Experience your park after hours as we recreate that night 50 years ago when locals and visitors flocked to Wright Brothers National Memorial to witness history. You’ll enjoy special ranger talks, a rebroadcast of the original news coverage of the moon landing, and more. 1960s attire is encouraged!

2:00pm – Ask an Astronaut: NASA Astronaut and Space Shuttle veteran Eric Boe will give a short presentation on his experiences in space and lead a question and answer session with the audience.

7:00pm – Featured Program: Hear from Park Superintendent David Hallac and Active NASA astronaut Eric Boe who will discuss spaceflight, the legacy of the Wright Brothers, and the newest NASA initiatives to return man to the moon and beyond.

8:10pm – Rebroadcast of Walter Cronkite Footage of the Moon Landing: Watch the news coverage of this historic event just after 8:00 p.m. and conclude around 8:45 p.m.

Click here to RSVP to help your park anticipate attendance and ensure a great experience for you.